Pencil on black paper. I have several of these, so I hope you like it because the next few posts will similar. I thought about grouping them together, but if I start putting things in groups, I'll run out of drawings too quickly.
Posted by Nathan at 1:10 PM No comments:

red and black pen
Posted by Nathan at 1:59 PM 2 comments:

I don't think it's ugly, but it made me laugh the first time I saw it. It looks like a puppy that's happy to see you and wants to run around in circles aimlessly. Not really my type of car, but interesting nonetheless.

(photo from motortrend.com)
Posted by Nathan at 6:30 PM No comments:

Email ThisBlogThis!Share to TwitterShare to FacebookShare to Pinterest
Labels: cars 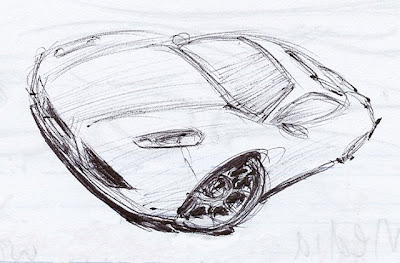 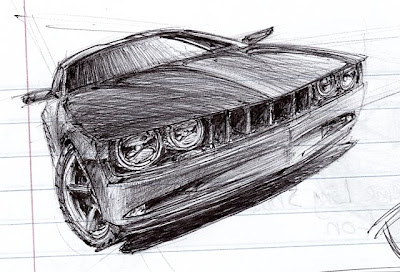 Posted by Nathan at 1:03 PM No comments:

HAMILTON DID IT!!! (barely)

(Yes, this post is a day late, but I just watched the race.)

It was a very exciting and tense final race of the 2008 Formula One season at the Brazilian Grand Prix. With his championship rival Felipe Massa comfortably in the lead, Hamilton only needed to finish fifth to take the title, by virture of a seven point lead in the championship. He only managed fourth in qualifying, but was able to hold on for much of the race. In the last few laps, it began to rain, and many cars pitted for wet tires. Lewis was barely holding on to the crucial fifth place with three laps to go. At the end of the lap he ran wide and Sebastian Vettel got ahead of him. It looked be all over. Timo Glock had opted not to pit for wet tires and managed to jump from eighth up to fourth, fifteen seconds ahead of Hamilton. On the last lap, the rain began to fall harder and Glock began to struggle for grip. In the last few corners, he couldn't hold on any longer and had to slow down as Vettel and Hamilton passed by. Hamilton therefore crossed the finish line in a much needed fifth place, becoming the youngest ever Formula One World Champion by just one point.
Posted by Nathan at 12:28 AM No comments:

I thought it might be fun to make a blog and I have a lot of car (and other) drawings I don't know what to do with.

I'll also post some of my photography and computer illustrations, and probably a few other random things as well.