It snowed a bit today. (Click the picture to see it in full size.) 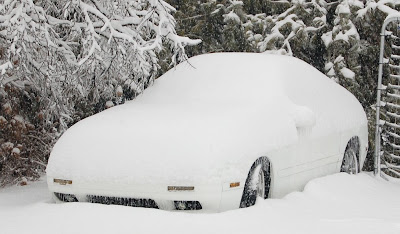 I guess I won't be going anywhere anytime soon.
Posted by Nathan at 12:00 AM 2 comments:

Email ThisBlogThis!Share to TwitterShare to FacebookShare to Pinterest
Labels: photos

The Koa Strat is finished. It looks much better now, and has all the correct pickups. Click the picture to see a bit more detail. 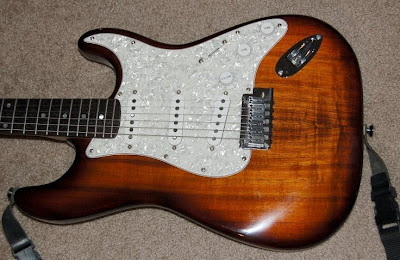 The squire is coming along nicely and painting should be complete sometime this week. Then I can start the real mod...
Posted by Nathan at 11:00 PM No comments: 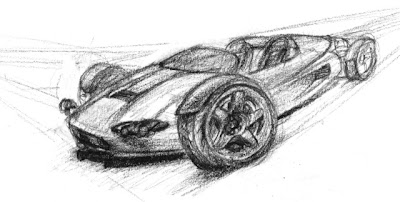 Posted by Nathan at 7:03 PM No comments:

First of all, Merry Christmas and Happy New Year.

In today's post: Les Paul updates and the story of how I went to get rid of one guitar and ended up with two, one of which was an unexpected good deal.

I'll start with the updated Les Paul.
It now has black hardware and new pickups: 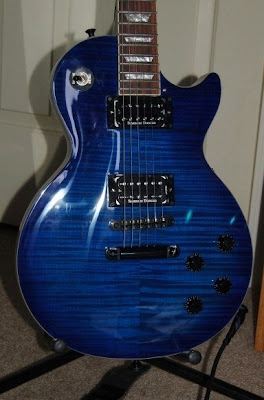 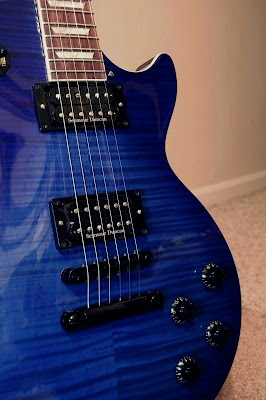 For various reasons, I decided to let it go and trade it in to the aptly named Music-Go-Round (where I bought it), a store that buys and sells used music gear and instruments. I wanted a Fender Stratocaster to compliment the Les Paul, and saw this as a good opportunity to get one for cheap (or "free"). I wanted a cheap one that I could modify without the worry of messing up a good guitar. (Yes, I modified the Les Paul, but those were relatively simple, nondestructive mods that can easily be undone, unlike painting it or something.)

There was a cheap $99 Squire (Squire is to Fender what Plymouth is/was to Chrysler), which played ok and looked like it had seen better days. It had stickers, scratches, dents, and chips all over, and part of the headstock had been broken and repaired. It was exactly what I needed, but me being me, I wanted an actual Fender...

There was a decent white one I liked, but it was left-handed (so close, yet so far). There was also a really nice one with some sort of transparent finish. It was priced well, but was actually too nice. It wasn't one I would want to modify. I also didn't like that it had a humbucker pickup (Strats are supposed to have single coils!). However, it was a good guitar for a good price.

I couldn't decide which one to get, so I got both. The Squire for modding, and the Fender for playing. (Yes, that's one for two.) Together, they cost a bit more than my trade-in, but it was still a decent deal. (Turned out to be a way better deal than I knew at the time - more about that later.)

First, a pic of the fixer-upper Squire (post sticker removal - yay for vinegar)...

I know it looks a little crazy-wacky, but that's kind of the point.
I've sanded down the body. It was supposed to be flat black, but it's actually more of a charcoal color. I covered the fretboard with black electrical tape because paint will just scratch off. (The red stripe will be paint, though.) I also took the white covers off the pickups. Right now, it's masked off and ready to paint. I'll post pics when it's finished.

Here is the Fender:

I didn't do any research and didn't know much about Fenders (still don't), so I had no idea what to look for. I thought it was just a nice, but low-end (based on the price) Stratocaster.

I got it home and looking a little closer, I started to wonder if it was a fake or copy. It was still really nice, but the logo was not typical Fender. I posted pictures on an internet forum, and a few people agreed it was a probably a copy or had had the neck replaced or something. I was a little disappointed. Then someone made my day and identified it as a Special Edition Koa Stratocaster with a different pickguard and bridge pickup. 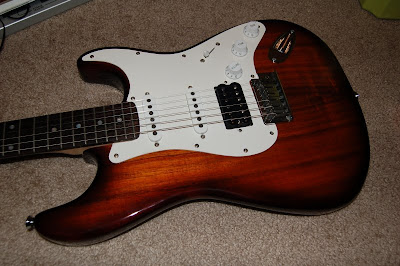 It's in nearly perfect condition except for the pickguard and pickup.
The next step is to restore it to stock with a correct pickguard (it's supposed to be pearl) and pickup so it will look like this:

I might put the humbucker in the Squire or possibly even the Les Paul depending on what it is (I need to take apart the Fender to find out).

I guess that's all for now.

Posted by Nathan at 1:29 PM No comments:

I thought it might be fun to make a blog and I have a lot of car (and other) drawings I don't know what to do with.

I'll also post some of my photography and computer illustrations, and probably a few other random things as well.